Work hard for what you envision, and you will succeed. Kolson’s founder, John Landy, transformed this American notion into the Kolson brand.

Born in 1927, John is the prototypical success story of America’s “Greatest Generation.” A veteran of both World War II and the Korean War, he eventually went to Baruch College on the GI Bill. While there, he not only earned his degree in retailing, but he also met the love of his life, Ruth.

In 1960, John and his father Louis bought Kolson Hardware, a general hardware store located on Cuttermill Road in Great Neck, NY. In 1970, the store moved to its current home at 653 Middle Neck Road in Great Neck. At the time, the site had a lumberyard in the back, and a top floor occupied with apartments.

The general hardware business was steady, but John had a vision of something different, something more. Homeowners were becoming more sophisticated in their tastes, and John saw an increasing desire for the kind of high-end plumbing fixtures and decorative hardware that couldn’t be found in a typical hardware store. He and his wife, Ruth, began to comb trade shows in America as well as Germany, England, Spain, Italy, and France. John established new relationships with the top American and European manufacturers

John’s father passed away in 1975, just as the new Kolson business model was emerging. As the business continued to grow, the lumberyard was closed and converted to storage space for Kolson’s expanding inventory. In 1980, the second floor became available and was reinvented as a kitchen and bath showroom. This showroom displayed Kolson’s expansive selection of faucets, sinks, toilets, mirrors, medicine cabinets, and bathroom accessories from the most innovative American and European manufacturers. Increasingly, professional designers and architects flocked to Kolson, knowing they would find exactly the unique fixture or hardware they needed.

In 1985, the family tradition continued when John’s daughter, Dale, joined the company. Five years later, she transformed both the first and second floors into the luxurious, eye-popping showrooms they are today.

Kolson is committed to providing the best products and the best service to both loyal and new customers throughout the Tri-State area. 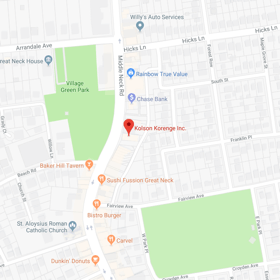